Hello All! Today I’m going to talk about one of the characters in the longest running movie series out right now. The Xmen! This movie series is now going on its sixteenth year with the upcoming movie for Xmen Apocalypse. A lot of people are wondering how the eighth movie of this set is going to do. We’ve seen the storyline done in the present, past, and future, and now they’re going to show the interim between the past to how it got to the present. They’re showing how Charles Xavier became the bald badass in the wheelchair we know today. They’re finally showing characters like Psylocke, Jubilee, Angel and so many more. They’re also showing returning characters we all love like Cyclops, Beast, Nightcrawler, Storm, Magneto, etc.

If any of you are Game of Thrones fans like I am, then you’ll see that our lovely Sansa is playing the role of the ever powerful Jean Grey. I don’t know about you guys, but she looks absolutely perfect for the part. The casting looks great, I’m looking forward to seeing if she can actually live up to the role though. Some people are saying she won’t be good because of the character she plays in Game of Thrones. If there’s one thing anyone should know about an actor or actress, it’s that you can’t judge how they’re going to do in one movie based on another movie. I mean look at Ryan Reynolds. A lot of people thought he was going to be absolute shit in Deadpool because of his role in Green Lantern, and he did fantastic.

I know this Jean Grey is going to be different from the ones in the former Xmen movies because it won’t be the same confident and controlling Jean Grey that knows the strengths of her powers. There are already some fanart photos of how Sophie will turn out. 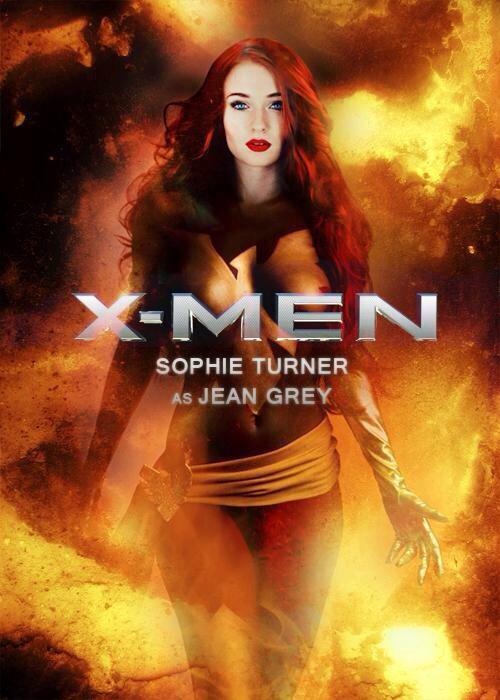 This is going to be the young teenage Jean that can’t even make friends properly without feeling completely insecure about it. She’s going to be a bit shy, but she’s still going to be the extremely powerful mutant we all know. This is back when she couldn’t control her own powers, back when she was scared of not people, but scared of how she could hurt others. She won’t be the same Jean Grey as Famke Janssen, but it’ll be different to see how the character is portrayed.

I’m also curious on how she’s going to act with the new Scott too and how they’re going to show them together when they first met. Is it just me or is everyone else really excited to see the younger versions of the Xmen that we already love? Let me know what you guys think, Squad Out!